Flight to the Lights

The inaugural Flight to the Lights was a chartered flight organised by Ian Griffin to view the Aurora Australis. The 767 took off from Dunedin Airport and flew to 62° south. It was an amazing experience. Because of our altitude and latitude the photographs really portrayed the depth of the aurora - something you could never capture standing on a south facing beach. The flight was timed so the moon rose towards the end of the flight at around 2am. The moonlight was very bright but amazing at that altitude as it reflected on clouds below.

Photography out of a plane window proved an interesting challenge. I had my tripod set up on the window set with the camera lens as close to the window as possible. Despite the cabin lights being turned off there was still alot of ambient light from the plane which caused reflections from the double layered windows. I brought a black beach towel with me and found that the best technique was to lower the window shade as much as possible and block out the rest of the window with the towel. Most shots were between 5 and 10 second exposures however any turbulence, movement of the camera, or gaps in the towel ruined the shot. 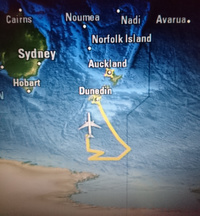 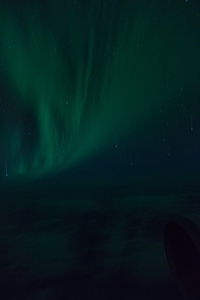 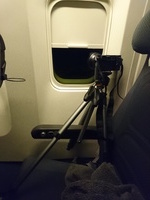