History was like that - a negative at which one was the print, the positive. He thought: People are not separate individuals as they think, they are variations on themes outside themselves … The lost remain the lost, the found the found

The Avignon Quintet are a collection of novels written by Lawrence Durrell between 1974 and 1985. The novels cover a range of topics including personal identity, sexuality, ideology, love, the scientific method, and free will. Durrell writes with an incredibly rich style, and sets complex characters in engaging set pieces. 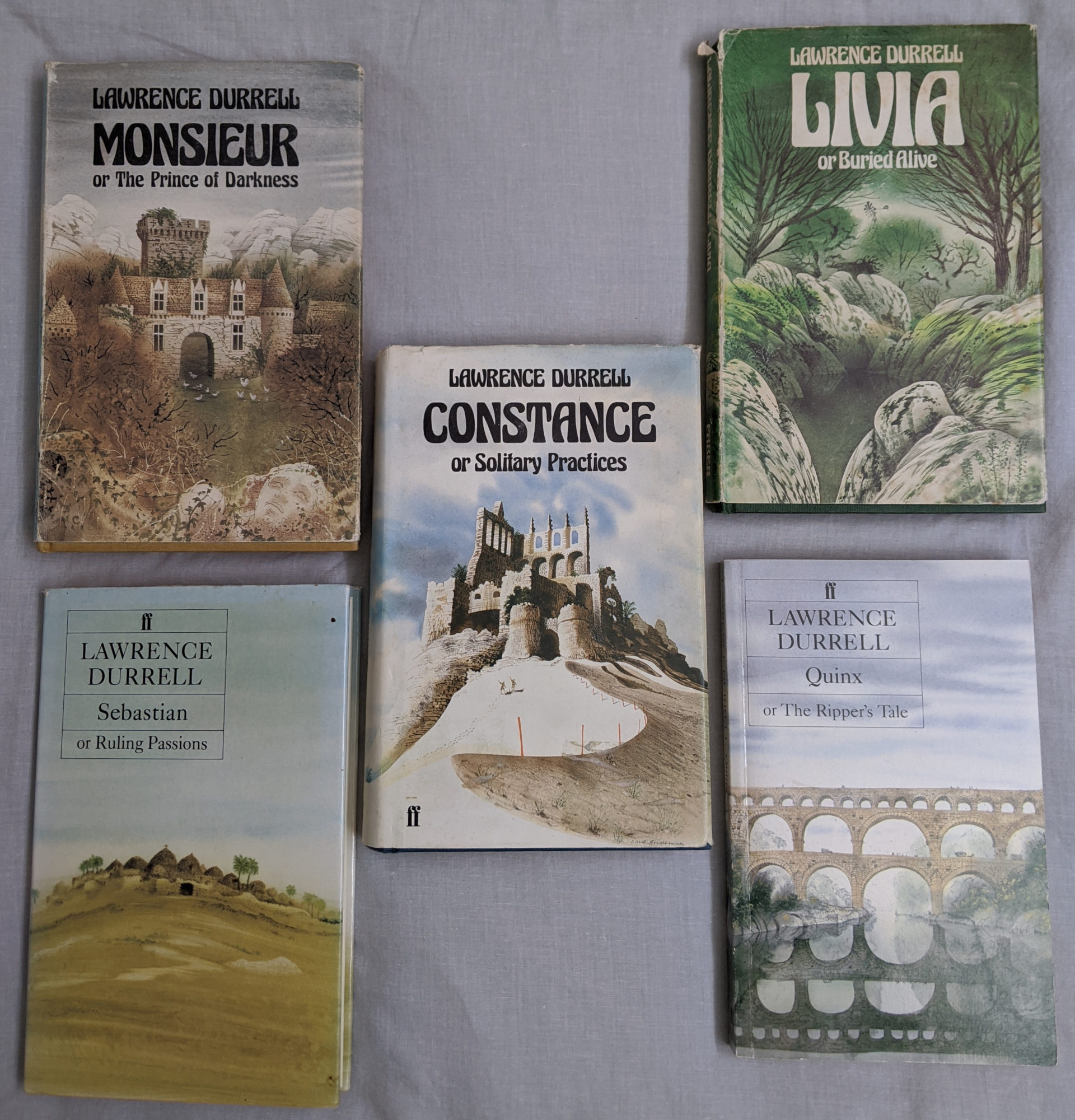 The novels begin in Provence, southern France, in the mid 1930s. A group of English university students are on summer holiday at a rundown family manor. The books follow these characters throughout World War 2 and the years after. We also meet several larger than life figures. Prince Hassan of Egyptian royalty, General Von Esslin of the German Army, and Lord Galen a bumbling British aristocrat.

Lawrence Durrell is most known for his Alexandria Quartet written a couple of decades earlier. From those books he brings some of the same literary elements. Most enjoyably the importance and emphasis on the location where the books are set. Alexandria, London, and Geneva all appear in the Avignon Quintet, but the city of Avignon is the main feature. There are pages of beautiful prose describing this one time city of the popes.

Everything on that joyful morning seemed to clean like a new coin - a newly minted currency of vivid impressions. He felt words stirring inside his mind, like some long-hibernating species which a tardy spring had wakened only now, struck by the romance of the green swirling river, and the cypress punctuated hills he was approaching. To really appreciate a place or time - to extract the poignant essence of it - one should see it in the light of departure, a leave taking. It was the sense of farewell in things which impregnated them with this phantom of nostalgia, so important for the young artist.

In 1309 the Catholic Papacy moved from Rome to Avignon. There, Pope Clement V acted to dissolve and outright destroy the Knights Templar. The Templars, rich in wealth, military power, and influence were accused of heretical crimes and were outright tortured into admitting their guilt. Avignon’s connection with the Templars echos throughout the book. Lord Galen gets taken with the legend that there is Templar treasure hidden in Provence, and funds expeditions to find it.

Personal identity is the core theme of the book. What is it that forms who we are? Does our identity determine our opinions and actions, or do relationships and ideologies give us no real choice on how to act? Durrell examines this theme of personal identity through a few different lenses.

One is ideology. The Knights Templar, Gnostic religion, Egyptian mysticism, and Gypsy tradition are all significant. The 1930s was the time of Freudian psychology and Constance, a main character, is a student of his teachings. We see the Freudian description of the mind (bordering on Scientism) contrasted against the spiritual Indic Yoga. Pure Hedonism is enjoyed by some characters, to the simultaneous disgust and interest of the Freudians. The Nazi ideology plays a big part of 2 of the books. Nazi ideas are discussed by characters in the mid 1930s and are treated ambivalently by the British characters. That blissful ignorance is shattered as war breaks out and the atrocities are revealed. Interesting parallels are drawn between the Catholic persecution of the Templars and the occupying Nazi treatment of the local French population.

I thought I was living my own life but all the time it was living me without any extraneous aid. It had taken me half a century to recognise this! What a blow to my self esteem.

Relationships are also used to examine identity. Ok, just about every author does this, but to me there is some indescribable uniqueness to how Durrell writes. Love, hurt, absence, resentment, and joy. We all feel these strong emotions while in relationships, or once they end. Durrell’s thesis is that these are things we don’t merely feel, but they alter our own personality. How someone loves (or loved) you changes the way you love forever.

The crisis came when early man first lost sexual periodicity, for then he risked running out of desire. The race was imperilled by his indifference. So the anxious divinity, Nature, invested the specious beautiful crutch of Beauty to spur him on. What could be more un-natural, more delightfully perverse? Looking through each other’s eyes the lovers saw more than the memory of each other, they saw ‘it’ and were at once humbled and captivated.

Durrell brings in metafiction to uniquely explore the theme of identity. Aubrey Blanford, a main character, is an author. The first book of the Avignon Quintet, Monsieur - Or the Prince of Darkness, is itself a novel written by this character Blanford. The remaining 4 books are set in Blanford’s ‘universe’. In those 4 books we see Blanford’s life and hear his inner dialog on love and emotions. We see him wrestling with these things and retrospectively learn how he forms the characters and plot of Monsieur. Blanford literally crafts the identities of his characters. His characters are fictional, but their identities come from the life Blanford really lived. Of course Blanford is himself a fictional character of Durrell. It’s turtles all the way down. This might sound tacky or forced, but Durrell writes this amazingly.

As for the book it was to be a hopeless task, for what is to be done with characters who are all the time trying to exchange themselves, turn into each other? And then, ascribing a meaning to point-events? There is no meaning and we falsify the truth about reality in adding one. The universe is playing, the universe is only improvising!

The Avignon Quintet is a true great of literature. Wide ranging in scope and intellect. Both dramatic and entertaining. Reading these was an incredibly reflective experience for me. We are probably less individual than we all think. Instead controlled by the beliefs we follow, those we love, and those we have loved. We are all just characters in other people’s lives.

I got all 5 books between my two local second hand book stores. I’m sure you can do the same. Or, if you’re local to Wellington, I can lend them to you.

The Avignon Quintet is